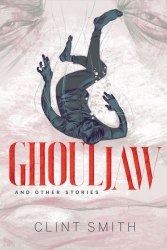 Ghouljaw & Other Stories is one of the finest debut collections I’ve had the pleasure to read this year, every bit as impressive as Jason A. Wyckoff’s Black Horse (2012) and Nathan Ballingrud’s North American Lake Monsters (2013), sharing with these works a breadth of originality that makes it required reading for both readers and writers of Weird Fiction.

As the back cover blurb accurately declares, these are tales of “the squalidly ordinary and the terrifyingly extraordinary.” Most feature characters whose personal traumas quite literally begin to take on a life of their own. This metaphoric style of storytelling is evident from the very first offering, “Benthos”, in which a graduate student, lured to a party and soon thereafter into cheating on his girlfriend, becomes the very benthic horror of his guilt-ridden psyche. In “Dirt on Vicky” we encounter a single father recalling and then visiting (at the prodding of his curious young son) an abandoned farmhouse appropriately named “the Aikman place”, where memories of his dead wife take shape. This is a tale that the late Robert Aickman might very well have included in his Fontana Book of Great Ghost Stories series.

In the introduction to this collection, S.T. Joshi points to Smith’s originality in regard to “the weird conception.” This is perfectly exemplified in “Don’t Let the Bed Bugs Bite” (the simplicity of the title should not fool you; this is a brilliant and complex tale), which focuses on the seemingly disparate elements of dust, bugs, a deceased companion, and a vacuum cleaner, and renders each into an entity you will not soon forget. While all the tales are chilling to a degree, one of the most terrifying was “Like Father, Like…”, which begins ordinarily enough, with the main character returning to his hometown to attend his father’s funeral; but, as a series of unusual events begin to occur, he realizes that there is a very different purpose for his being there. The denouement quite literally clamps both reader and protagonist into an inescapable nightmare. And this is just one of the many things Smith does so well: ending his tales in unexpected and satisfying ways.

While most of the offerings are cast in varying shades of bleakness, one notably exception was “Corbin’s Gore”, in which something as simple as an unwanted sweatshirt becomes a world into which the protagonist can experience an aspect of his life previously aborted. Perception and memory figure into many of the tales as well. In “The Hatchet”, two brothers are forever changed when they unwisely disturb the occupant of a darkened house on Halloween. At one point the protagonist (who is now middle-aged) has this to say about the house: “It was as if the entire property resided in a faulty pocket of perception.” Such a conceit might very well stand as the modus operandi of the entire collection.

There is a deep literary and genre feel to Ghouljaw & Other Stories, and Smith has more than succeeded in crossing the streams, as it were, to fashion something profoundly unique. These are tales that are a pleasure to read, both for their literary acumen and for the way they bore deeply into the brainpan. Amid all the fine offerings being released this year, Ghouljaw is a standout, and a certain contender for best collection.

As an addendum, I should also mention the existence of a “book soundtrack” (available via iTunes), which was specifically produced by Shadeland frontman Allen Kell. It makes a worthy, and quite eerie, accompaniment to the words, adding another delectable layer to the whole.

Listen to the audio adaptation of my short story “The Dust Child” on the podcast Horror Tales (30 min.)